Since the pandemic started in March of 2020, Del Mar beaches have seen an exponential increase in the number of adolescent great white sharks along its shores.

It has been well known that the breeding of great whites has never been witnessed, but what has been established is they are born 20-30 miles directly west from Torrey Pines State Beach, which borders the south end of Del Mar.  When asking local officials who’s job it is to protect the citizens and visitors from the dangers lurking in all the area’s waters, their response is to try to ignore the problem since the bad publicity would damage our local economy, plus there have been no attacks to speak of.

But what if that isn’t the whole picture.  It’s imaginable to see politicians and their bureaucrats leave out what can be left out when culling their constituents back to sleep, and forget one of the world’s most frightening monsters is swimming besides surfers and children playing in the ocean on a daily basis.  It has gotten so crowded with sharks in del Mar that lifeguards have stopped keeping track.  When interviewing one on the beach they can be quoted of saying, “Yea, it’s the Pacific Ocean, Brah.  It’s where they live.”

The local surfers who regularly visit the reefs and sandy bottom beach breaks have gotten used to seeing the 6-10 foot sharks swimming in-between their legs as they dangle beneath their surfboards, or in a breathtaking display of natures beauty when the sharks breach 10 feet or more out of the water just 100-200 feet from the beach. Surfers are so accustomed to the sharks that many do not bother to leave the line-up where they wait to catch their next wave. 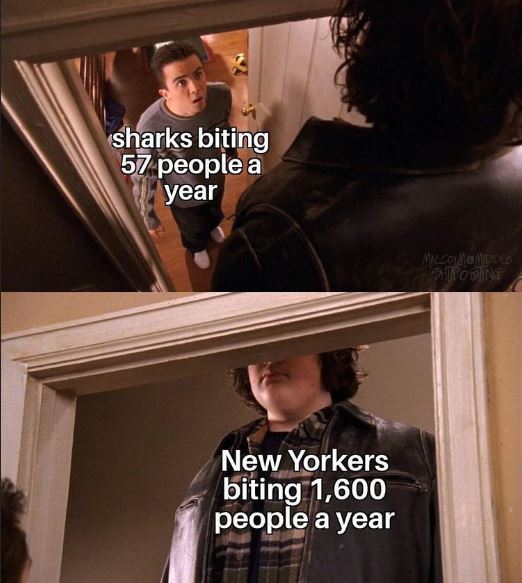 Each local surfer has their own attitude about the sharks and their own theory as to why they have become such a fixture to the surfing experience in Del Mar.  Some have speculated that due to the decrease in traffic and noise from the pandemic was the first logical explanation.  Next the locals considered the lack of dolphin sightings in the area who naturally can dominate the sharks since dolphins live in groups and often gang-up on a singe shark.

Those theories work for about a day before you see dolphins the very next day, or you realize that the traffic on the 5 freeway is back in effect, and we haven’t been in a lockdown in over a year.  That leads some of the locals with the lingering question, “then why then?”

Surfers talk in the water about this all the time.  They gossip, guess, speculate and pontificate everything that is their surfing world here in Del Mar.  When drone footage of the sharks swimming among the surfers goes viral, the community knows.  When SANDAG plans to restrict access to the beach, the surfers know.  When a cliff failure from home construction occurs, the surfing community knows. When the world’s richest man, Bill Gates pays $43 million for a house on the sand in Del Mar, the surfers know. And when construction on that house is non-stop for over 18 months, the surfers notice that too.  And this is where it gets interesting.

If you follow Bill Gates, you either love him for his PR efforts, or you hate him for running monopolies in the 1990’s, or the fact that he was a close friend of Mr. Jeffery Epstein.  The same is true for the Surfers in Del Mar, and the beach goers who are suspicious of their new intercontinental robber barren neighbor all want to know the same thing…  What is Bill having built under that new home of his?

Why would Bill Gates want to live on the beach closest to one of the largest great white breeding grounds in the world?  The community deserves to know.  Is Bill Gates building an underwater shark cave to complete his perfect villain persona?

Local sea captain and regular surfer, Athan Anas is skeptical. “It’s ridiculous to think that sharks are attracted to his place when the entire ocean is full of the things that sharks want.”  Other locals aren’t buying that.  If sharks can be taught to use lasers, like in the historical classic thriller based on a true story, Austin Powers, then why couldn’t Bill Gates train them to guard his sinister lair’s perimeter from any would be foes?  Locals are convinced this most logical expiation has the highest chance of being the real reason.  Bill Gates has built an underwater cave lair to the liking of Batman and Dr. Evil so vast, it likely has it’s own shark breeding facilities, and at least one submarine entrance that would also allow the strictly trained sharks to come and go as Bill sees fit for proper security.

The local community will never know this truth for sure until Bill either admits it, or is caught in his submarine cruising the Del Mar coast with his pet great white sharks in tail.  Until then, the locals will stay vigilant and aware so that the mystery of the Bill Gates shark phenomenon can be solved once and for all.